In this post, we’ll delve into measuring CO₂ levels. We’ll use the MH-Z19B sensor, connected to a Raspberry Pi, and read out its measurements using Python.

First off, some background information on indoor CO₂ levels. (Note: this is about CO₂ = carbon dioxide, not CO = carbon monoxide.1)

CO₂ levels are measured in ppm or “parts per million”: out of a million molecules in the air, how many are CO₂ molecules? Currently, CO₂ levels in the atmosphere are about 420 ppm, with slight seasonal variations. An interesting side note is that, before the Industrial Revolution, atmospheric CO₂ levels were around 280 ppm, but we’re not here to talk about climate change.

Indoors, CO₂ levels can vary from 420 ppm (the atmospheric level is the minimum you can reach, when you have your windows open), to 1500–2000 ppm in closed rooms, and even higher in crowded rooms such as class rooms or meeting rooms. The largest contributor to this is the CO₂ humans and large pets exhale. (A large dog exhales about half the CO₂ a human exhales.)

Elevated CO₂ levels can lead to several health problems, such as headaches and drowsiness. Recommendations vary, with the United States goverment currently limiting exposure to 5000 ppm for an eight-hour period, but other studies showing possible negative effects starting at 1000 ppm. (A level of 40,000 ppm is considered “immediately dangerous to life and health”, but you’re unlikely to encounter that.) If two people sleep a whole night in a closed bedroom, it’s possible to get to levels of 2000 ppm. Especially in modern, well-insulated homes and in schools and offices where many people gather, it is therefore important to have sufficient ventilation to keep CO₂ levels below these limits.

I got interested in measuring CO₂ at home to better configure my ventilation unit. This machine sucks in fresh air from outside and blows “used” air out (and at the same time has a heat exchanger that warms the incoming air using the outgoing air). Its air flow rate can be configured from 0 to 100%. Higher rates use more electricity and therefore cost more, but of course its rate should be high enough to keep CO₂ levels below safe limits.

You can find many CO₂ sensors online. There are roughly two kinds: those that measure VOC and those that actually detect CO₂ molecules. The first kind detect Volatile Organic Compounds (VOCs): organic compounds that we exhale together with CO₂ and can therefore be used as a proxy to estimate the CO₂ in the air. However, results of such sensors often have quite large errors, as shown for instance in this video: a tumble dryer produces dust that contains VOCs, but does not produce CO₂. A VOC sensor will therefore incorrectly report high CO₂ levels when a tumble dryer is on. The usually cited advantage of VOC sensors is that they’re cheaper. The second kind of sensors measure CO₂ directly, but are often said to be more expensive. However, the MH-Z19B sensor is a cheap sensor of the second kind, so that’s why I chose to use that one.

The MH-Z19B sensor measures CO₂ using the non-dispersive infrared (NDIR) principle. It has an infrared lamp, of which the light is directed through two chambers. The first chamber is open to the air we want to measure; the second contains a reference gas, typically nitrogen. At the end is a detector. The gases in each chamber absorb certain wavelengths, and by comparing the results of the two chambers for the wavelengths absorbed by CO₂, we can calculate the CO₂ concentration in the air.

The MH-Z19B sensor has a reported accuracy of about 100ppm and a measuring range from 0 to 5000ppm. Its results should also be independent from the humidity. You can find the MH-Z19B sensor on AliExpress or European electronics websites (didn’t check others) for about $15 or €15.

Connecting the MH-Z19B sensor to a Raspberry Pi

It is easy to connect the MH-Z19B sensor to a Raspberry Pi, as shown below. (Figure from here.) 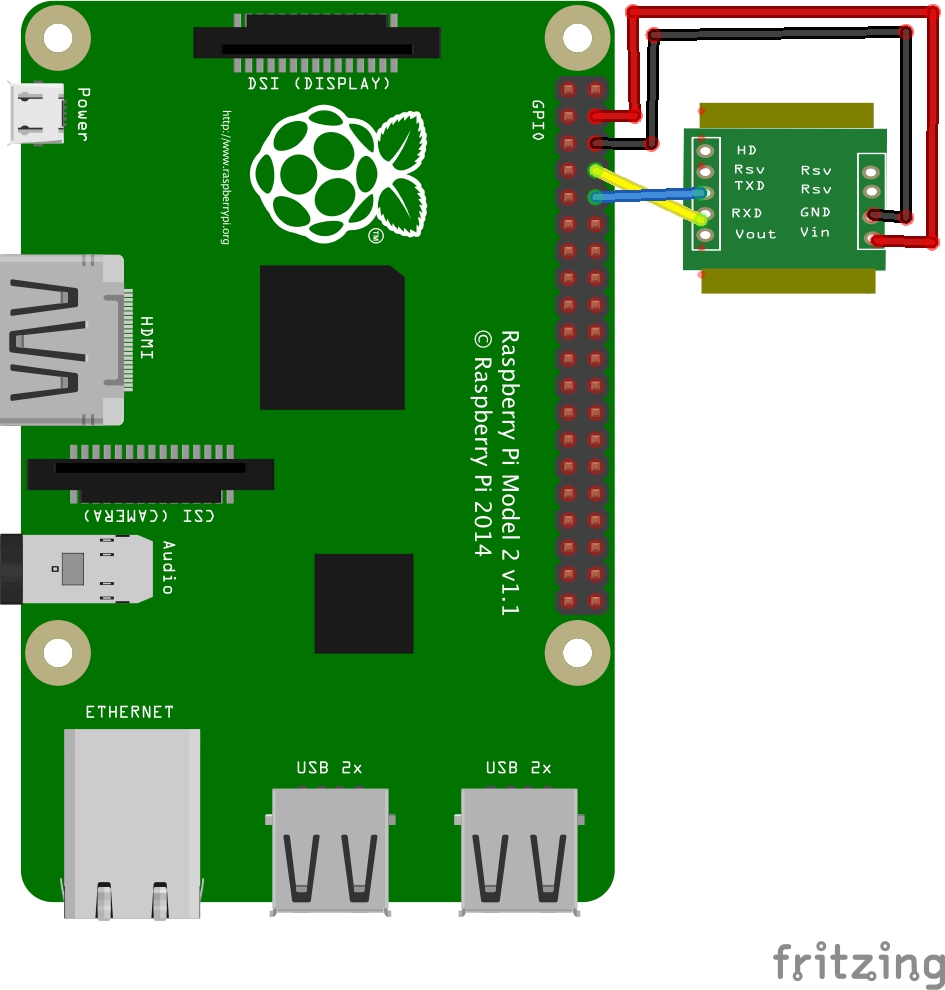 This table shows which pins to connect: (for Pi models with 40 pins, that is all models since 1B+ up to at least 4B, check here)

I found two versions of the MH-Z19B sensor online: one with just “holes” at the end and one with pins soldiered on already. I bought the ones with pins, so that I could use female-to-female jump wires to connect the sensor with the Pi.

The Raspberry Pi communicates with the sensor over its UART (universal asynchronous receiver-transmitter) interface: a device for asynchronous serial communication. You need to enable this by following some tricky steps, as in this guide or in the Raspberry Pi documentation. I’ve copied the instructions for the Pi 3 below, assuming you’re using Raspbian.

By default the serial port is assigned to the Linux console, allowing you to execute commands in a console over the serial port (using a service called getty). We want to disable as we want to use this port for the MH-Z19B sensor instead, do this as follows:

Raspbian also comes with a GUI to configure these options.

At the bottom of /boot/config.txt, add the following line:

Reboot the Pi after these changes. The serial port is now available at /dev/serial0 (RPi 3 as well as older versions).

Now that we’ve connected the sensor to the Pi, we can start reading its measurements. You can find the full code on my GitHub. It’s a refactored and simplified of an existing library for my use case. I’m using Python 3.

We are using the pyserial library to connect to the device. Its path is /dev/serial0. The following code will read the current measurements:

Here, the connect function connects to the device, returning an interface to the device. We then write nine bytes to the device: FF 01 86 00 00 00 00 00 79, which is the command to read the CO₂ concentration you’ll find in the MH-Z19B documentation. It’ll return nine bytes, which we’ll number 0 up to 8. What bytes 4 to 7 represent is not mentioned in the documentation, but people have tried to figure this out.

There’s an easy and fun way to test whether the sensor works: pour out a can of Coca Cola, beer, or other carbonated beverage, and hold the sensor above the glass. It should immediately measure CO₂ levels of several 1000s ppm.

The sensor must be calibrated. It’ll consider the “ambient environment” level to be 400 ppm, and calculates its levels relative to that. There are three ways to calibrate the sensor (see sensor documentation):

I use the self-calibration because it is the easiest, as it does not require you to figure out when your sensor is in an environment with a CO₂ level of 400 or 440ppm. Note though that on its first use, you may have to have the sensor powered on for at least 24 hours before it’ll give accurate results. Using my script, you can enable automatic baseline calibration with python3 mh-z19.py --abc_on.

There’s one more feature I haven’t mentioned: you can set the sensor’s detection range to vary from 0 to 2000, 5000, or 10000 ppm. According to the documentation, this setting should not influence the sensor’s accuracy.

Automatically running this script and writing results to file

When my Python script runs without any parameters, it performs the measurement and writes its output as JSON to the terminal. As a final step, let’s run this script continuously and write its results to a file. I created a shell script mh-z19.sh, containing:

This’ll run the script, and use tee to print its result to both the terminal and a log file. Every 2 minutes, a new measurement is added.

We’ve now succeeded in measuring the CO₂ in house. In a next post, I’ll explain how we can show these results in a graph on a web page.